The title of this volume of Pat Nolan’s selected poems, So Much, references the seminal (and most divisive) poem of modern American poetry by William Carlos Williams about a red wheelbarrow, chickens, and rain. The poems in this selection were actualized and finalized beyond their handwritten originals on a typewriter hence the designation of this twenty year span from 1969 to 1989 as Handwritten Typewriter.  In memory of Ted Berrigan, adherent to Whitman’s maverick impulse and O’Hara’s Personism, under the guidance of Schuyler and Whalen, with a nod to early 20th Century French poets and the sages of the East, and esteem for Anselm Hollo and Alice Notley, Pat Nolan’s poems hit all the right post-Beat, California School of New York Poets, Pacific Rim demotic notational ephemerist notes. 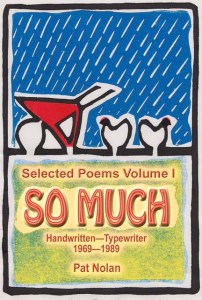 “If I have any purpose as a poet it is to remove myself from the musty authority of an entrenched academic conservatism and approach the word in its current state of utter mutability.  The poems selected here are representative of an acquired esthetic sourced outside of the doctrinaire Anglo-American literary tradition.  They do not aim at rhetoric nor do they seek to persuade.  Their primary intent is to present the fine distinctions of a perceptual identity in a uniquely spontaneous improvisational manner to the ear as well as to the page.  Sound and sense, discordant or melodious, over meaning equals poetry. The poems are also particularly anti-social in the implication that the forward progress of culture increasingly encapsulates individuals in their private auras. As such there is a specificity to each of the poems unique to my sensibility and experience as a poet that is not necessarily universal and insists that an effort be made to cross over into an extraordinarily unexceptional reality. Their reliance on chance operation corresponds to their reliance on chance appreciation.” —from So Much More 1969-1989

“. . .reminded me of James Joyce in that brief moments can become long & engrossing & turn the page for you despite any wishes thoughts & warnings you may have about more . . . .” —Keith Kumasen Abbott, author of Downstream From Tour Fishing In America, A Memoir.

“Reading a book of Pat Nolan poems, I tell myself to breathe, to be mindful, because everything is here, from the Zen moment that never ends to the surreal architecture we live within.”  —Bart Schneider, author of Nameless Dame

Selected Poems Volume I
SO MUCH
Handwritten Typewriter
1969-1989

See How To Order for details