A small number of this very rare chapbook has recently been recovered from the storage locker of a prominent Bay Area bookseller.  Published in 1973 by Cranium Press,  handset in Goudy types and printed on an Albion hand press by master printer Clifford Burke in an edition of three hundred, they are an exquisite example of Burke’s conception of how a poem should appear on the page. The sixteen poems by Pat Nolan, printed on the rag paper ends from a larger Book Club of California job, represent Nolan’s early experimentation with ideas adapted from Chinese and Japanese prosody.  The austere brown paper wrapper is offset by the red centered label depicting a group of Renaissance musicians; that it represents a trio, not a quartet, is, in fact, an inside joke.  The book measurements are 7.5×6.75 inches (19×17.1 cm).  Signed copies of The Chinese Quartet are available for purchase at $50 each and include free shipping in North America (otherwise international rates apply).  Cash, checks, or money orders accepted.  See How to Order for more information. 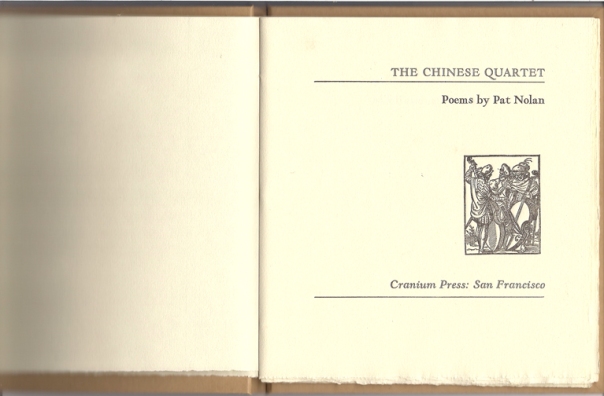 “The poems are wonderful as a grouping, and the printing is freaking beautiful. One of the best examples I’ve seen of the type and spacing and paper enhancing the sensibility in the writing.”  — Eric Johnson, Iota Press

Still available for FREE from Nualláin House, Publishers is a limited edition letterpress broadside of Pat Nolan’s poem Advice To A Young Poet and his original linoleum cut of Dylan Thomas from the Smoking Poets series, printed by Eric Johnson of Iota Press on a Vandercook proof press.  Send your request, along with $2 for shipping and handling, for this limited edition broadside printed on the occasion of Nolan’s reading at the Iota printery upon the publication of his latest collection of poems, Your Name Here. Broadside measures 10×8.5 inches (25.4×21.6 cm).

A reminder to take a look at Nualláin House, Publishers’ allied sites, Parole, the blog of The New Black Bart Poetry Society, and Ode To Sunset,  A Year In The Life of American Genius, an online serial fiction.

Here are a few pictures from the publication party for Pat Nolan’s Your Name Here held on Sunday, November 9th, 2014 at the Iota Press Printery in Sebastopol, California.  Many thanks to Eric, judi and the rest of the Iota Cooperative of Fine Printers for hosting this splendid event.  A few remaining copies of the broadside featuring an original linoleum print of Dylan Thomas from Pat Nolan’s Smoking Poets series and the poem Advice To A Young Poet from Your Name Here signed with the author’s seal are still available for those who did not have the opportunity to attend the publication party due to previous engagements or geographic constraints.  For a free copy send $2 USD (check, or money order made out to ‘Pat Nolan’ or cash) to cover shipping and handling to  Nualláin House, Publishers  Box 798  Monte Rio, CA 95462

For those living in the North Bay latitudes of Northern California, Iota Press wishes to invite you to their 5th Annual Open House on Sunday, Dec. 7th, from 2:00-6:00.  Please come and help celebrate their first year in the new and bigger shop space at the printery behind the BeeKind Honey Store, 925D Gravenstein Hwy. South in Sebastopol.

The occasion will also be  the launch party for their third annual collaborative work, eRrAtiCa 3. This year it is in the form of a portfolio of broadsides, representative of the kind of work each of the members are working on right now. There will also be a demonstration of printing, and impromptu poetry might be read. Maybe some promptu as well. As usual wine and food will be provided, and there will be a table of things for sale.

Praise for Your Name Here, New Poems
by Pat Nolan

“The book itself takes no prisoners.”
—Lucille Friesen, poet, printer

“Pat Nolan is one of the poets, Ted Berrigan once said, that you have to always keep an eye on because he can do unexpected startling things that leave you eating his dust. What was once “irony,” which is that generous distance of youth regarding itself in the odd act of “seeing” and “scratching” words became an essential tool to survive as poet. Pat Nolan’s poetry has indeed survived, with the help of not just the luxury of irony, but also the blending of his secretly bilingual (French-Canadian and American) language, his intensely questioned, but never renounced, faith in poetry. Add to this work, the joyous and extensive reading of a profound autodidact with an active and sometimes polemical involvement in the “literary scenes” of the West and East coasts for better than half a century, and you have, standing suddenly in front of you, a poetry giant.”
— Andrei Codrescu, author of Bibliodeath: My Archives (with Life in Footnotes), and So Recently Rent a World: New and Selected Poems, 1968-2012.

“Nolan’s painterly sensitivity unfolds a delicate beauty that breathtakingly fuses nature with a Surrealistic philosophic questioning and meditative soul searching. Descriptions of nature so translucent we can only marvel how he weaves us into them, onward, around that eternal share of misfortune, bitter realization, and expectations gone wrong. This is Nolan’s secret power.  He engages us in magical transformation and will not let us look away.”
— Maureen Owen, author of Erosion’s Pull and Edges of Water

“. . .reminded me of James Joyce in that brief moments can become long & engrossing & turn the page for you despite any wishes thoughts & warnings you may have about more . . . .”
—Keith Abbott, poet, professor emeritus, and author of Downstream From Trout Fishing In America, A Memoir.

“The poems glow with insight and wit as they simply monitor the flow of a mind steeped in Chinese poetry, bebop, the Russian River, the beats, the birds, Heraclitus. . . .  [Nolan] in his own words, is an alphabet male.  And despite the breadth of his learning and thought, is always just talking from right here.  It’s a hell of a book.”
—Eric Johnson, poet and print master at Iota Press.

Never one to settle into a style, Pat Nolan has made of his poetry an exploration of other poetries and of the numerous ways a poem can be.  As an adherent of the Philip Whalen Buddhist-inspired “mind moving” school, he holds to the idea that the poem is framed sentience. Just as the observed world is an occasion of subjectivity, it also mirrors the self in a way that reflects objectively.  The poems in Your Name Here revolve around that quantum axis with seemingly random discontinuities that do not pin down meaning but are left to mean themselves.  Written to be heard by the mind’s ear, Nolan’s poetry enacts a sub-vocal monologue that is like the murmur of cosmic background radiation, noticeable only in its cessation or as pauses when the mind registers the sum of discrete moments in an instant.

Now available, click on How To Order on the menu bar to learn how.

Poet, translator, editor, publisher Pat Nolan is the author of over a dozen poetry selections and two novels.  He is the founder of Nualláin House, Publishers, and maintains The New Black Bart Poetry Society’s blog, Parole (thenewblackbartpoetrysociety.wordpress.com).  His work has been published in numerous national and international literary magazines and included in late 20th Century poetry anthologies and collections. He has recently begun posting his online serial novel, Ode To Sunset (odetosunset.com), about poets and poetry, death and dying. He lives along the lower Russian River in Northern California.

For readers in the North Bay latitudes of Northern California, join Pat Nolan for a publication party on November 9th.

at the Iota Press printery
925-D Gravenstein Hwy. South
Sebastopol CA
(behind  BeeKind)
Meet the author, book signing and sales,
refreshments in a convivial literary atmosphere
Caution: some poetry will be read 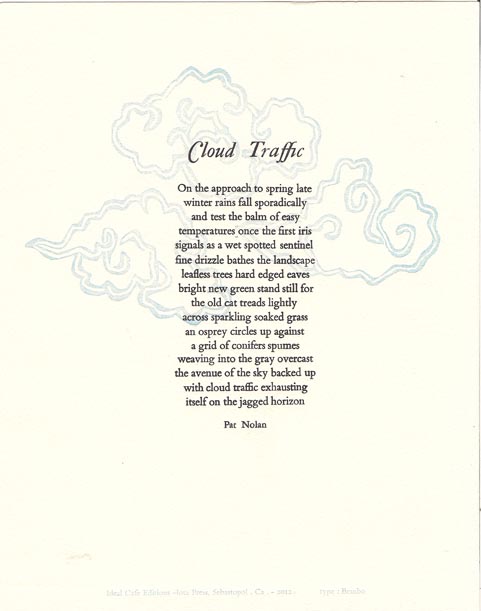 A poem and linoleum cut by Pat Nolan in a signed and numbered edition of fifty, printed in Bembo by Luci Edwards on Arches Text  (6 5/8 x 8 3/4 in.; 16.9 x 22.3 cm) from Ideal Café Editions at Iota Press Sebastopol, CA available now for $10 each, postage included, for a limited time only through Nualláin House, Publishers.  See How To Order for more information.