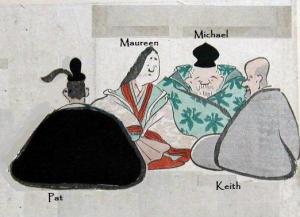 All Ears, a haikai no renga or linked verse, was the first of the collaborations between Maureen Owen, Keith Kumasen Abbott, Michael Sowl, and Pat Nolan to be made into a limited edition handmade book and was published by Empty Head Press in 2004.  Subsequently, Random Rocks and Poetry For Sale, both haikai no renga, were issued as limited edition handmade books(see Nualláin House archives for July 2013 and October 2012).  All Ears was also included in the anthology Saints of Hysteria, A Half Century of Collaborative American Poetry (Soft Skull Press, 2007).

All Ears was composed through the mail over a period of a year and a half beginning in early 1992.  Once the 36 stanzas (kasen) of the haikai-no-renga were completed, each poet was asked to comment on the process in general, and on their own stanzas and those of their collaborators.  The arrangement of stanza follows the standard haikai form of 8 stanzas on the first sheet and 8 stanzas on the back sheet with the remaining 20 stanzas taking up the central text.  Following the haikai no renga and the commentary by the poets is the sequence showing the stanza assignment as well as which poets had the moon and flower stanzas.

All Ears was bound using repurposed “sticks & strings” wallpaper sheets from a wallpaper sample book as cover stock and backed with Japanese silkscreen endpapers.  Each cover was unique in itself. The pages were folded vertically with a folded leading edge as is common in Japanese books.  Each book was hand sewn using a Japanese side stitch style known “tortoiseshell.”  The dimensions are 4.25×10 inches (10.5×16.5 cm).  Only a limited number of All Ears were produced and it is out of print.

To view a PDF facsimile of All Ears, click on ALL EARS 2004

By The Miner School of Haikai Poets

Random Rocks is a limited edition haikai no renga (linked verse) published by Bamboo Leaf Studio in 2007.  The size of the edition was linked to the number of stanzas in a kasen, a standard renga length employed by Basho and his disciples, and in the memorializing of the 36 immortal poets of Japanese literature.  Random Rocks measures 5.5x 7 (14x17cm), is hand sewn in the Japanese side stitch style, bound in heavy green chiri paper, momogami binding strips and features Japanese silk screen end papers.  The edition was divided evenly among the four haikai poets to distribute as they saw fit.

The Miner School of Haikai Poets have engaged in the practice of haikai no renga over a period of thirty years, written primarily through the mail and more recently, email.  They are Pat Nolan, Keith Kumasen Abbott, Michael Sowl and Maureen Owen. The Miner School’s haikai have been published in numerous magazine including Hanging Loose, Exquisite Corpse, Jack’s Magazine, Big Bridge, and Simply Haiku as well as in limited edition chapbooks and broadsides from Empty Head Press, Bamboo Leaf Studio, and Tangram Press.  Their kasen, All Ears, was included in Saints Of Hysteria, an anthology celebrating collaboration, from Soft Skull Press (2007).

One of the unique features of Miner School haikai is that it includes a running commentary by the authors on each of their own stanzas as well as a stab at their collaborators’ links.  It functions in a way similar to commentary provided as a special features audio track on a DVD.  The introductory essay to another kasen, Bamboo Greeting, published in Simply Haiku (2008), further details some of the unconventional methods practiced by The Miner School of Haikai Poets.

Haikai no renga is a form of renga (Japanese linked verse) practiced by Basho (1644-1694) and his disciples.  It consists of a 17 syllable verse and a 14 syllable verse provided in turn by the poets engaged in the collaboration.  In linking verses, a 31 syllable poem is produced, the latter verse of which (the 17 or the 14 syllable) will go on to join the next in the sequence to form its own unique poem, and so on until the requisite number of stanzas has been achieved.  Renga sequences can number into the hundreds.  Basho favored the economy of 36 stanzas.  Renku is diminutive for haikai no renga also known as haikai.  The more renowned Japanese verse form, haiku, is derived from the practice of amassing numerous hokku to vie for the privilege of opening a moon-viewing-sake-sipping evening of friendly literary collaborations.   Renga itself is derived from the courtly form of poetry exchanged by the aristocracy as exemplified in Lady Murasaki’s 11th Century The Tale Of Genji.  The rules of the composition for renga and haikai no renga are complicated and arcane, but like those of chess or go can be captivating and stimulating.

A pdf facsimile of RandomRocks 2007can be found here.