The title of Pat Nolan’s two volume selected poems, So Much, references modern American poetry’s seminal work by William Carlos Williams, about a red wheelbarrow, chickens, and rain. The poems in this second volume were actualized and finalized beyond their notebook originations on a word processor hence the designation of this twenty year span from 1990 to 2010 as Notebook Keyboard.  As poet and critic Andrei Codrescu has said, Nolan’s poetry “survived, with the help of not just the luxury of irony, but also the blending of his secretly bilingual (French-Canadian and American) language, his intensely questioned, but never renounced, faith in poetry. His sense of wonder, sometimes wary and wise, often surprised, is always in and of the world around him.”

Adherent to Whitman’s maverick impulse and O’Hara’s Personism, in memory of Ted Berrigan’s working class élan, under the guidance of Schuyler and Whalen, with a nod to early 20th Century French poets and the sages of the East, Pat Nolan’s poems hit all the right post-Beat, California School of New York Poets, Pacific Rim demotic notational ephemerist notes.

“Modern poetry demands that I evince more than just a casual interest—that is the purpose of its complexity.  My exposure is saturated with multimedia.  It is to be expected that my response will attempt to match those various inputs. At a certain point in history the page presents itself to the modern poet as a field upon which to act rather than as a blank space on which to introduce a narrative of something that has already occurred.  What is set on the page is not transcription but interaction.  In its revelation the poem steps into the adjacent possible. Potential field poetry recognizes that in a field of random words there is the probability of a multiplicity of meaning. I welcome that multiplicity. A unified theory of literature requires an understanding that all writing is sentience framed by the semblance of language.”

The poems selected here are representative of an acquired esthetic sourced outside of the doctrinaire Anglo-American literary tradition.  They do not aim at rhetoric nor do they seek to persuade.  Their primary intent is to present the fine distinctions of a perceptual identity in a uniquely spontaneous improvisational manner to the ear as well as to the page. 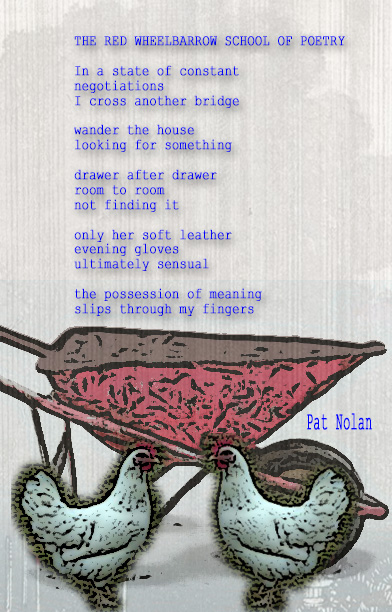 “. . .reminded me of James Joyce in that brief moments can become long & engrossing & turn the page for you despite any wishes thoughts & warnings you may have about more . . . .”

—Keith Kumasen Abbott, author of Downstream From Tour Fishing In America, A Memoir.

“Reading a book of Pat Nolan poems, I tell myself to breathe, to be mindful, because everything is here, from the Zen moment that never ends to the surreal architecture we live within.”

See How To Order for details