The selection of poems in Exile In Paradise are derived from a lifelong appreciation of Chinese poetry.  Each of the  poems finds its origin in a line from an ancient Chinese poet.  The body of the poem consists of an improvisation from that line with the aim of using elements of Chinese prosody such as parataxis and parallelism while being cognizant that Chinese nouns have no number, verbs have no tense, few if any conjunctions or prepositional indicators, and that each line contains its own integrity, apart from any overarching discursive intent.  Chinese poetry is image rich and largely dependent for its overall effect on the juxtaposition of these images in a discontinuous thread that is not unlike the successive frames of film.  The poems in Exile In Paradise makes use of this ancient prosody to achieve a synthesis between an historically distant culture and the contemporaneous radically different literature of today. 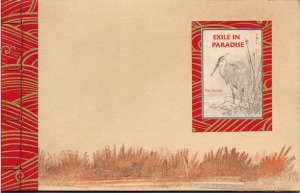 Exile In Paradise was published by Bamboo Leaf Studio in 2009 in a limited edition signed by the author with his seal.  Most of the covers are made from repurposed ‘stick & strings’ wallpaper samples and vary with each copy. A few of the covers were printed on a distressed heavy weight print paper using a stencil design. The endpapers are Japanese silkscreened patterns imported from Kyoto, as are the binding strips. The illustrations accompanying the poems are reproductions from a nineteenth century block printed Japanese compendium of seals and calligraphic signatures of ancient Chinese painters in the possession of the author.  Exile In Paradise measures 5.5×8.5 inches (14×21.5 cm) and is bound with a traditional four hole Japanese style binding.  The poems were printed on a limited supply of discontinued Gainsboro text stock.  Exile in Paradise is out of print in this edition.

To view a pdf facsimile click on Exile In Paradise 2009