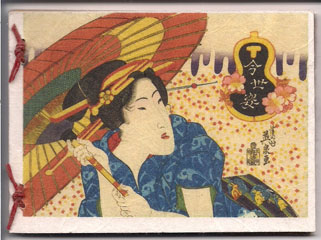 Carved In Stone, a tanka sequence by Pat Nolan, was published by Empty Head Press in the Summer of 2013 in a limited numbered edition signed by the author with his seal.  The covers are printed on heavy weight dragon cloud washi featuring reproductions of one of four Japanese prints from the series Imayo sugata (Stylish Appearances) as are the bamboo leaf endpapers.  Carved In Stone measures 4.25×3 inches (10.7×7.8 cm) and is bound in the Yamato style binding.  The 26 text pages (including 5 illustration) are printed on recycled paper.

Tanka ,meaning ‘short song,’ is an unrhymed poem with a fixed thirty-one syllable pattern of 5-7-5-7-7.  In Westernized stanza form, it is a five line poem.   Tanka, one of the oldest of Japanese verse forms, dates back to before the 11th Century.  Tanka gained renewed popularity in the late 19th Century among radically modern young poets who brought its diction and subject matter up to date.  Historically, tanka is a precursor to renga, haikai, and haiku.

The poems in Carved In Stone do not follow precisely the fixed syllabic count nor do they conform to many of the accepted tanka conventions but seek a synthesis and accommodation brought about by translation into a radically different language and culture. 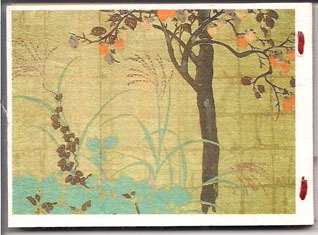 A few copies of Carved In Stone are still available from the publisher for $20 each plus shipping.  See How To Order for more information.