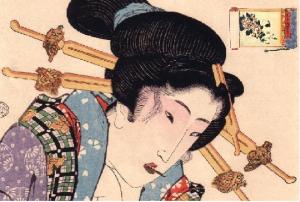 Thin Wings was published in the Fall of 2005 by Empty Head Press in a limited edition lettered A through Z, signed by the author and bearing his seal, “wandering like a cloud,” each with a unique cover, some as reproductions of Japanese prints in the author’s collection, silk screened Japanese end papers, and hand sewn in the Japanese four-hole side stitch style.  It is made available here as a pdf file.

Tanka ,meaning ‘short song,’ is an unrhymed poem with a fixed thirty-one syllable pattern of 5-7-5-7-7.  In Westernized stanza form, it is a five line poem.   Tanka, one of the oldest of Japanese verse forms, dates back to before the 11th Century.  Tanka gained renewed popularity in the late 19th Century among radically modern young poets who brought its diction and subject matter up to date.  Historically, tanka is a precursor to renga, haikai, and haiku.  The poems in Thin Wings do not follow precisely the fixed syllabic count nor do they conform to many of the accepted tanka conventions but seek a synthesis and accommodation brought about by translation into a radically different language and culture.

Cloud Notes
Tanka originated as court poetry early in Japanese history. I would hesitate to call these poems tanka because that presumes a mastery of a complicated set of rules and conditions.  The poems. . .actually owe more to the intricate prosody of haikai no renga (known as renku or linked verse), than to this ancient form, especially in the relationship between [the split] stanzas.  There is, as a matter of fact, a renku term for a poem composed of only two links and that’s ‘tanrenga.’  As accurate as that may be, I am uneasy with that label.  ‘Tanku,’ a word of my own invention, would seem to accommodate the Japanese nomenclature (haiku, renku) but it too doesn’t suit my sense of these poems.  Ultimately, I find myself preferring tanka as the logical as well as sentimental favorite for what this kind of poem might be called.  I do so well aware that the designation is a borrowed one.