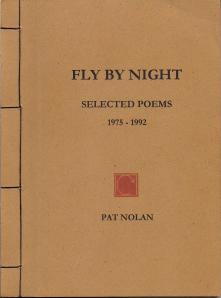 Doris Green Editions originally published Fly By Night as a limited edition specifically for the author’s readings at Naropa University in Boulder, Colorado and at The Poetry Project in New York City in November of 1992.  In 2006, Re:issue Press reprinted the selection of poems in the original edition adding the subheading Selected Poems, 1975 −1992. A few modest editorial changes were also made, and the biographical information updated.  Surplus covers from the original edition were recycled and cut down to fit the current format, from 8×10 to 5×7.  The hand-sewn Japanese style binding and the folded leading edge of the page are unique to the reissued edition.  A review of Fly By Night by Gabriel Ricard was published at the Unlikely Stories blog.  Here then is the full text of that 1992 selection of poems: Fly By Night Selected Poems 1975-1992