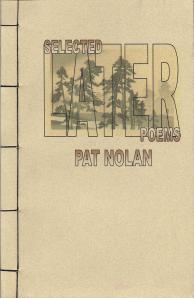 LATER was printed in a limited edition hand bound in the Japanese side-stitch style with covers printed on gray-green stock.  A limited number of copies are still available for $10 US plus shipping.  Please see How To Order.

To view a pdf facsimile, click on Later Selected Poems 2007