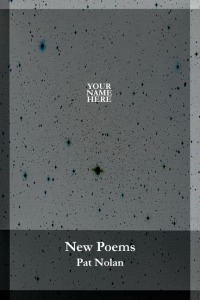 “The chief characteristic of the mind is to be
consistently describing itself.”

Pre-order and get free shipping

Advance Praise for Your Name Here

Pat Nolan is one of the poets, Ted Berrigan once said, that you have to always keep an eye on. That’s not because he might suddenly win all the prizes the world owes you, but because he can do unexpected startling things that leave you eating his dust. Some poets are like that: they start slow and lazy as if life was enough, and then rev it up to some speed you thought only angels can get up to. Pat Nolan didn’t start slow, he started accurately, determined to be in the world without missing anything, not the wind in the trees, not the work of his contemporaries, not the changes of seasons or times. Like the Chinese poets Kenneth Rexroth translated, Nolan was always spare and articulate, attentive to beauty and impatient with sloppiness. Through the decades, his attention to nature, people, and his own observance of them, never wavered, but the onset of time, layer after imperceptible layer, kept adding meaning and sobriety to the clarity of his born-wise voice. What was once “irony,” which is that generous distance of youth regarding itself in the odd act of “seeing” and “scratching” words became an essential tool to survive as poet. Pat Nolan’s poetry has indeed survived, with the help of not just the luxury of irony, but also the blending of his secretly bilingual (French-Canadian and American) language, his intensely questioned, but never renounced, faith in poetry. His sense of wonder, sometimes wary and wise, often surprised, is always in and of the world around him, even when it flees playfully with the early heroes of French comic superheroes like Fantomas. Add to this work, the joyous and extensive reading of a profound autodidact with an active and sometimes polemical involvement in the “literary scenes” of the West and East coasts for better than half a century, and you have, standing suddenly in front of you, a poetry giant. I hope you’ve kept an eye on him, like I did, because with Your Name Here, he is indeed compelling all poets to put their name there. And when they do, amazing things happen. Go on, try it.
— Andrei Codrescu author of Bibliodeath: My Archives (with Life in Footnotes),  and So Recently Rent a World: New and Selected Poems, 1968-2012).

We hear in these works a kinship to that most glorious free spirit of the Tang Dynasty, Tu Fu. One can almost imagine Pat Nolan building himself a thatched hut and living the life of a farmer. Matching the light brush of that Master, Nolan’s painterly sensitivity unfolds a delicate beauty that breathtakingly fuses nature with a Surrealistic philosophic questioning and the meditative soul searching of a Sumi wash. Descriptions of nature so translucent we can only marvel how he weaves us into them, onward, around that eternal share of misfortune, bitter realization, and expectations gone wrong. This is Nolan’s secret power. He engages us in magical transformation and will not let us look away.
— Maureen Owen, author of Erosion’s Pull and Edges of Water

Poet, translator, editor, publisher Pat Nolan is the author of over a dozen poetry selections and two novels. He is the founder of Nualláin House, Publishers, and maintains The New Black Bart Poetry Society’s blog, Parole. His work has been published in numerous national and international literary magazines and included in late 20th Century poetry anthologies and collections. He lives along the lower Russian River in Northern California.