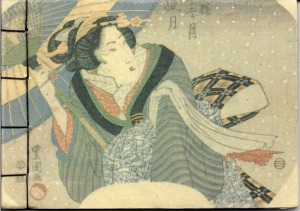 Untouched By Rain was published in 2005 by Empty Head Press in a limited edition, lettered A through Z, signed by the author and bearing his seal, “old goat.” Each hand-made book has a unique cover, many as reproductions of  uchiwa-e, Japanese fan prints, features silk screened Japanese end papers, and is hand sewn in the Japanese four-hole side stitch binding.  The black & white illustrations accompanying the tanka represent traditional Japanese motifs such as the cherry blossom, crane, bamboo, and pine. Untouched By Rain, and a companion selection of tanka, Thin Wings, were originally made to be sold through the gift shop at the Sonoma County Museum.  Up until the gallery’s recent closing, both tanka selections were also offered through The Quicksilver Mine Company.  Less than a handful of copies of Untouched By Rain are still available.  Inquiries welcome.

Click to view a pdf facsimile of Untouched By Rain 2005

Tanka, meaning ‘short song,’ is an unrhymed poem with a fixed thirty-one syllable pattern of 5-7-5-7-7.  In Westernized stanza form, it is a five line poem.   Tanka, one of the oldest of Japanese verse forms, dates back to before the 11th Century.  Tanka gained renewed popularity in the late 19th Century among radically modern young poets who brought its diction and subject matter up to date.  Historically, tanka is a precursor to renga, haikai, and haiku.  The poems in Untouched By Rain do not follow precisely the fixed syllabic count nor do they conform to many of the accepted tanka conventions but seek a synthesis and accommodation brought about by translation into a radically different language and culture.